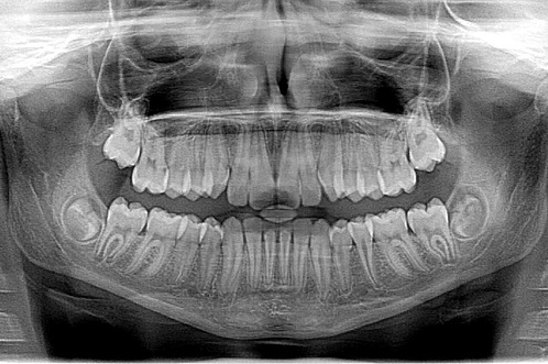 Malocclusion means all dysfunctions of the tooth form and the incorrect relation between the teeth. There are genetic factors which condition the occurrence of malocclusion, nonetheless, it is most often an effect of bad habits in childhood.

Genetic factors (inborn) which are responsible for malocclusion include the size of teeth and the facial bones composition and organization. These factors, however, cause only an insignificant number of malocclusions. Other malocclusions are effects of bad habits such as:

We usually grind our teeth at night, while sleeping. In effect, the cusps get worn down and the teeth get shorter. The shorter the teeth are, the greater is the possibility of changes in the temporomandibular joint.

The first symptom of these disorders (noticeable for parents) can be child's complaining about pain, cracks, or even a feeling of jaw "slipping" out of alignment. Sometimes teeth grinding appears not earlier than in the pubescence - especially in girls, who are more prone to the stress in adolescence.

Thumb sucking is a typical behavior found in babies. Usually, this behavior occurs only in the babyhood and then disappear on its own. However, if older children, who already have permanent teeth, continue thumb sucking, it may cause malocclusion. While thumb sucking, the child is stimulating wrong muscles. A thumb in the mouth presses certain part of the dental arches and the lower and upper jaws, what causes their deformation.

Another cause of malocclusion is an inappropriate consistency of foods, which causes chewing dysfunctions. The older the child, the more important it is to introduce into the menu foods that require chewing. If the parents give their child mashed foods for too long time, then the above mentioned behavior (which stimulates the development of jaw and muscles responsible for the chewing process) develops too late. In effect, the jaw gets narrower and the teeth are crowded.

Considering the fact that milk teeth are not permanent, the parents usually ignore the caries in children. They believe that the permanent teeth will appear right after the primary teeth extraction. In effect, children lose their milk teeth, which aim to "keep place" for the permanent teeth. Premature deciduous tooth extraction causes movement of the neighbouring teeth, and in effect, lack of space for the future permanent tooth. In turn, crowding of teeth is a cause for dislocation of permanent teeth (especially molars), because there is no space left for them in the jaw.